<< earth wants to be free >> about rights, autonomy & freedom of other-than-humans (camp/symposium)


as part of my Frontiers in Retreat residency with Helsinki International Artist Programme (HIAP), over the next days i'll be organising this camp/symposium... the proceedings will be published afterwards... 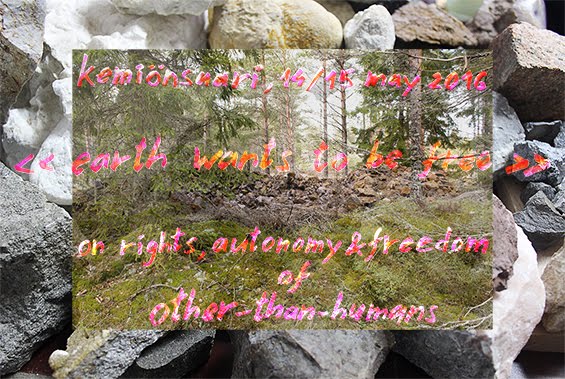 In 1972, the lawyer Christopher Stone wrote “I am quite seriously proposing that we give legal rights to forests, oceans, rivers and other so-called ‘natural objects’ in the environment - indeed, to the natural environment as a whole”. At the same time, the Supreme Court of U.S. was discussing the case in which the preservation organisation Sierra Club was trying to block the development of a ski resort in the Mineral King glacial valley in Sierra Nevada Mountains. The Court ruled against the defendants of the Sierras, provoking a dissenting opinion by Justice William ‘Wild Bill’ Douglas:
The ordinary corporation is a ‘person’ for purposes of the adjudicatory processes …. So it should be as respects valleys, alpine meadows, rivers, lakes, estuaries, beaches, ridges, groves of trees, swampland, or even air that feels the destructive pressures of modern technology and modern life. …. The voice of the inanimate object, therefore, should not be stilled.
The case was lost, but the ski resort was eventually never developed, and alternative stories of nonhuman personhood have continued to proliferated. Law, economy, politics, art, most of human practices, still to a large extent do not take into account the voices of nonhuman animals, plants, inorganic bodies, entire multitudes of entities are either backgrounded or silences. This oh-so-modern way of dealing with the world is presently contested across the board. Over the past few years, several countries recognised natural entities as holders of legal rights. In their own way, artistic and theoretical practices are increasingly taking other-than-humans ‘seriously’, listening to, co-performing, and conversing with those that do not speak our tongues.

In a two-day camp at the old copper mines in the island of Kemiönsaari in South-West Finland, the symposium will discuss the dynamics of shared trans-species conversations, with emphasis on ethico-political questions that present themselves when crossing the imaginary human–nonhuman border. How do we invite nonhumans to (freely) take part in conversations initiated by humans? What kinds of rights and freedoms are asserted through these naturalcultural minglings? What are the responsibilities and accountabilities of the humans towards the interpellated nonhuman persons? The participants will share their approaches through narration, discussions, exercises, workshops, audio-visual performances. Through this process, the camp hopes to advance understanding about the current possibilities and developmental pathways on this ‘wild side’ of arts and humanities......

The camp/symposium is organised as part of my residency with HIAP within Frontiers in Retreat project. we ❤ copper & copper ❤ us is ongoing art & research project about the intimate interactions of humans and earths that started in spring 2015 at his first HIAP residency. Since then it has had sequels in the UK and in Serbia at the residency with Cultural Front GRAD.

Posted by Mirko Nikolic at 10:34 AM No comments:
Email ThisBlogThis!Share to TwitterShare to FacebookShare to Pinterest
Newer Posts Older Posts Home
Subscribe to: Posts (Atom)