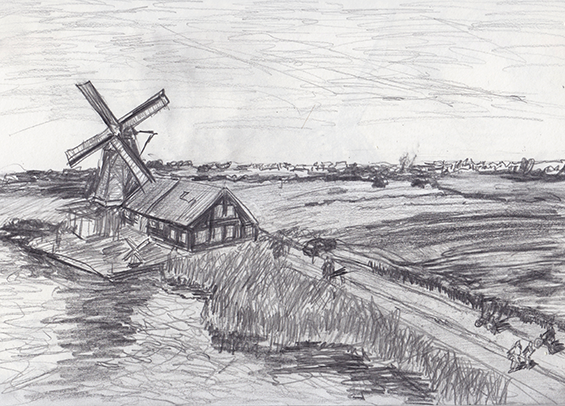 One of the fundamental elements of many a picturesque landscape, first in painting then in photography, is a windmill. And the people apparently love them. It's difficult to imagine a Dutch landscape without a windmill here and there. So, what's wrong with the new generation of wind turbines sprouting around our landscapes?

I won't delve into the opposition between eolic energy investors and protectors of landscape. But, one must admit that there is something uncanny to the sight of wind turbines in the landscape. They cause mixed feelings. It takes some time to get used to their sight. Not because of their shape, which is basically identical to any household fan, but because of their sheer height.  Even if they are far smaller than many urban structures, is highlighted in their context – flatlands or bare hilltop. We are impressed by them because of our human (or, at least, masculine) fascination (or obsession) with verticality.

Connected with this vertical impact, wind farms put in crisis our still deeply rooted mental and emotional separation between urban and rural environments, or, more precisely, between culture and nature. Wind mills are ultimate man-made artefacts, and they are perfectly urban, so what are they doing amidst the “nature”?! One needs then to put them in perspective with other practices of terraforming. Agriculture has been profoundly changing landscapes for millennia now, but we pretend that we’re just collaborating with nature. Other huge extra-urban structures, such as superhighways or railways are designed in such a manner as to (try to) blend into the landscape. Summing up, these are all essentially horizontal structures, and as such figure less in our orthogonal way of looking.

Not stopping at hilltops, wind farms are now colonising open sea, the protected realm of horizontality (if we forget about oil rigs for a second). In another era, let us say in modern times, it would have been a sign that the man has finally fulfilled his crazy dream of the domination of nature, having now all the resources and elements under control (that is, usufruct). But, although the renewables are in fact paving the path towards sustainability, they still attract critique from all sides of political spectrum and stir the public opinion in terms of their visual impact.

Still, there is a sublime beauty in wind turbines, a beauty which signifies our rethinking of the way we live with the environment. They embody and make visible the bond between the man and wind, in this sense they are symbolic. (Solar panels can be analysed in similar terms, too.) Precisely because of this, there is a strong aesthetic potentiality in the renewables. But, it seems like it is not actualised. Putting aside the sublime and symbolic notes, wind turbines are a bit dull or anonymous. In terms of design, there are other sexier solutions, and vertical axis turbines are very attractive. But, in terms of the relationship of wind generators with the surroundings, what can be thought up?

First option would be camouflage, thus to make them less visible. For that purpose, efficient tactics have already been devised to merge industrial architecture with their surroundings. A masterful example is JoritTornquist’s painterly camouflage of the most polluting chimney in the province of Brescia. On a clear day, this smokestack, the output channel of Brescia's waste incinerator, poetically embraces the blue sky, and the aesthetic impact is such than one forgets what its real purpose is. Apart from implicitly causing a detour of public consciousness, it is still an interesting example. We could think of wind turbines covered in vegetation patterns literally disappearing in the landscape. But, there are strong security issues requiring them to be highly visible, in order to prevent or minimise the damage to flying beings and vehicles.

Second approach would be informational transparency, thus diffusing measurement or hard facts about the production, as near to the site as possible. Visualisation of data in situ would no doubt arouse deep interest and even fascination in the public. Now that we are moving towards smart computing, why not make turbines data intelligent? One can think of displays or billboards on the ground, or indicators positioned on turbine towers (e.g, in form of LEDs, which would turn wind farms in thematic parks). Other, softer way of doing it is, of course, the use of smartphone apps or augmented reality glasses, now that they are about to hit the market. But, it is a mystery whether eolic energy producers would be interested in opening their numbers to the public.

Third approach, connected with the previous one, is playful-educational, or chromatic fancy. Let's look at someone who is specialised in education plus play. Namely, LEGO has been producing wind turbine sets since 2008. In parallel, the toys company invested a vast sum of money in offshore wind farms (not built out of LEGO bricks). Apart from environmental and community concerns, the intent of the company is to become 100% powered by renewables until as soon as 2020. Back to the bricks, the importance of LEGO and its plastic models in forging urban, social and political conscience of the young should not be under-estimated. The renewable energies sets will certainly contribute to the fostering of positive and playful imagery around the renewables. And not only imagery, but technical knowledge as well. A nerdier Education series offers fully operative wind turbines and solarpanels, so new crops of renewable energies engineers won't lack.

But, wait a second, LEGO wind turbines and solar panels look as near as possible to the real ones. They replicate the actual turbines and panels in terms of proportions (some sets contain yellow men/women figurines and trees, so the size is evident), design and colour. The colour. They are of the same shades of greyish white as the real ones. For me, LEGO, first and foremost recalls a rainbow spectrum structures.

So, why not make real wind turbines adopt some of genuine LEGO style?

What I mean by this is that real wind turbines could be colourful, lighting them up in fanciest of LEGO colours  – sunflower yellows, tomato reds, electric blues and so on. And why limit ourselves to colouring wind farms only? The whole of renewable energies structures, and especially infrastructures, could become as vivid as pointillist paintings. But why should they? Because colours are one of the best means of conveying knowledge. What kind of knowledge? The knowledge about the energy, where and how it is produced, how it is transported and how it arrives to our homes. This is one of the knowledges that have been rendered opaque to the citizens by traditional centralised energy complexes. Everything, from rotor blades to electric wires can be colour coded and painted, so anyone could follow the geography of their energy. On a sunny Sunday morning, a family, instead of going to a shopping mall, can engage in a game of “infrastructuraltourism” and retrace exactly where from their fridge is being powered. This way, the citizens would also be empowered to decide about the paths of their energy, and decide to which supply network they would like to connect, or construct their own power generators. Not to speak of sparkling the fantasy in the public sphere, in both adults and children alike, and creating a fantastically real vision of sustainability.

By making them more than visible and vibrantly so, and transforming landscapes of energy into wonderlands, the renewables could make a clear cut from the previous energy industries and invent a new poetic, social, and environmental world-view, thus view of the world.

Mirko Nikolić
Email ThisBlogThis!Share to TwitterShare to FacebookShare to Pinterest